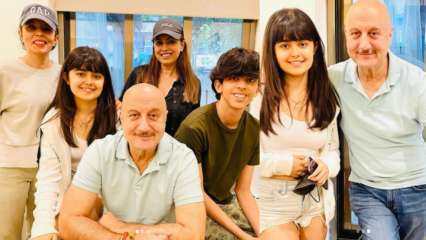 ‘Dhadkan’ co-stars Mahima Chaudhry and Anupam Kher crossed paths at a dental clinic in Mumbai on Wednesday (June 23). Their coincidental meet turned into a catch up session which included Mahima’s kids as well.

The ‘Pardes’ actor took no time to update the pictures on Instagram from the small get together. Sharing pictures of herself and the Anupam Kher with her kids – daughter Ariana, sister Akansha and sister’s son Ryan, Mahima wrote a heartwarming note. “All smiles when you are around, Anupam Kher. You carry joy with you. Thank you for the time spent, the gyan to the kids which made such an impact. Lots of love,” read her caption.

Replying to the post, Anupam commented, “So so wonderful to meet all of you. Love and prayers always!!.”

Mahima and Anupam shared screen space in the 2000 film ‘Dhadkan’, directed by Dharmesh Darshan. He played the role of Mahima’s father in the film.

Mahima made her acting debut with Subhash Ghai’s ‘Pardes’ in 1997 and was last seen in film ‘Dark Chocolate’ in 2016. She also starred in films like ‘Daag: The Fire’, ‘Pyaar Koi Khel Nahin’, ‘Om Jai Jagadish’, ‘Deewane’, ‘Kurukshetra’, and ‘Dil Hai Tumhaara’.

On the other hand, Anupam was last seen in ‘One Day: Justice Delivered’ which was released in July 2019. Anupam played the role of a retired judge in the film.