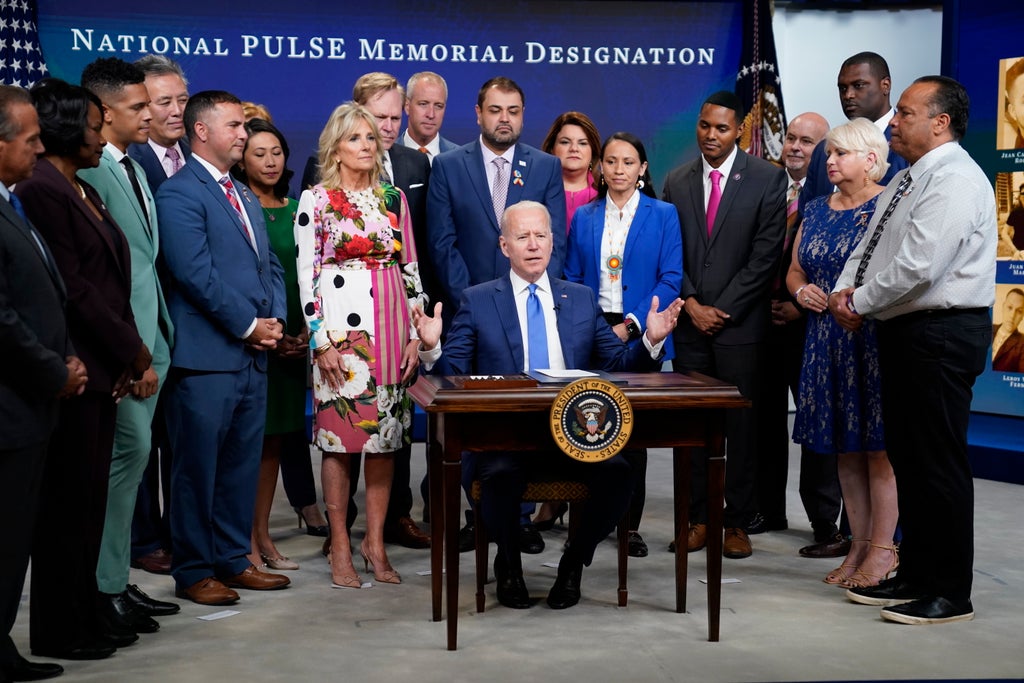 President Joe Biden has created national memorial to the 49 people killed in a massacre at Pulse nightclub in Orlando, Florida, the deadliest attack on LGBT+ people in US history.

The legislation passed the House of Representatives in May and the Senate earlier this month.

In a signing ceremony on 25 June surrounded by survivors and family members of the victims of the 2016 attack, when a gunman fired into the venue with an AR-15-style rifle and pistol, the president said: “May no president ever have to sign another monument like this.”

That night, “a place of acceptance and joy became a place of unspeakable pain and loss,” Mr Biden said. At least 53 people were injured, and 38 people were killed at the scene. Eleven people died at nearby hospitals. Most of the victims were Latino.

The declaration will “enshrine in law … literally, a monument to the loss that occurred there, and an act of determination … and make sure we’re not in a position to ever see this happen again,” he said.

His remarks follow the collapse of a 12-story condo building in Surfside, north of Miami Beach, where at least 159 people remain missing.

The president said he spoke with Florida Governor Ron DeSantis and pledged “all the help they need” from FEMA following a federal disaster declaration.

“Our heart goes out to them,” Mr Biden said. “I promise you, the administration, Congress, will do everything possible to get assistance now and after what they decided the state of play is.”

On Friday, the president also announced the appointment of Jessica Stern, the executive director of an international LGBT+ human rights group, as a special envoy at the US Department of State to promote and protect global LGBT+ rights.

“At a time when the human rights of LGBTQI+ persons are increasingly threatened in all regions of the world, the Special Envoy will bring together like-minded governments, civil society organisations, corporations and international organisations to uphold dignity and equality for all,” according to the White House.

The memorial declaration preceded remarks commemorating Pride Month and urging the Senate to pass the Equality Act, which would expand federal anti-discrimination laws to ban discrimination on the basis of sex, sexual orientation and gender identity.