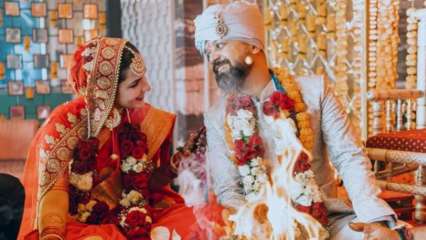 On Friday, actress Angira Dhar and ‘Love Per Square Foot’ director Anand Tiwari took to their social media handles to announce their wedding.

Alongside a beautiful photo from the wedding ceremony, actor-director Anand wrote, “On 30-04-21 Angira and I sealed our friendship into a marriage, with our family, closest friends and God as our witness. With life slowly unlocking around us, we wanted to unlock this happiness with you (sic).”

Take a look at the photo here:

Angira too took to her Instagram handle and share two photos from the hush-hush ceremony. The first photo was the same that Anand had shared, and the second was of Angira and Anand holding hands and smiling as they are being welcomed with a pooja aarti. In the photos, while Anand looks dapper in a sherwani, bride Angira looks ravishing in a red saree teamed with heavy jewellery.

On the work front, while ‘Bandish Bandit’ on Amazon Prime Video was Anand’s last directorial outing, as an actor he was last seen in ‘Nail Polish’, a ZEE5 Originals film. As for Angira, she was last seen in ‘Commando 3’ and has ‘Mayday’ in her kitty.