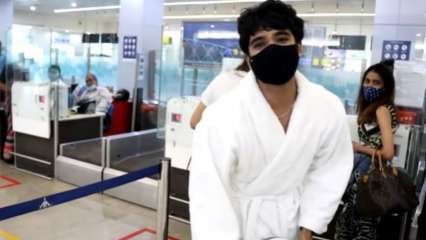 Airport fashion has been a thing for a while. From B-town celebs to TV stars, actors dress in the best of attires and sometimes even don out-of-the-box looks knowing that they would be papped en route or at the airport. And while most celebs put in a lot of effort to up their airport fashion game, TV star Zeeshan Khan, best known for his role in the hit daily soap ‘Kumkum Bhagya’, left his fans stunned when he was seen at the Goa airport in a bathrobe. Notably, before being spotted at the airport, Zeeshan was shooting in Goa wearing a robe and so he decided not to change his attire since he was feeling ‘comfortable’ in it.

On Friday, Zeeshan took to his Instagram handle to share a short clip in which he is seen walking inside the airport donning a bathrobe while expressing his amusement at the fact that everyone was giving him attention because of the way he was dressed.

In the clip, Zeeshan can be heard saying that he will create history by becoming the first person to travel in a flight wearing a bathrobe and that his name would be enlisted in the Guinness Book Of World Records.

However, the Air India staff thwarted his plans and told him that travelling in a bathrobe is not allowed. “Air India staff is a bummer,” Zeeshan is heard saying in the video.

About pulling the stunt, Zeeshan told SpotboyE, ‘Well I feel we have one life and we should completely make the most of it. Who decides it’s inappropriate to wear a bathrobe in public. If I’m comfortable then what’s the issue?’ Further, while confessing that he likes to challenge the norms, instead of just going along with them, he added, ‘I believe in doing what I want to. For me, there is one life and I am here to make the most of it, challenge the norms, and question them because some of them honestly are followed blindly.