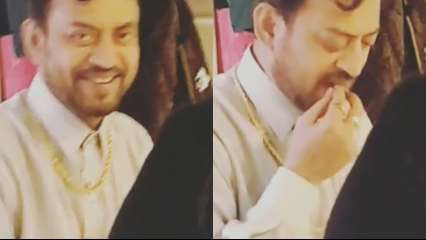 Late actor Irrfan Khan never liked playing cards. However, he would happily ask others to accompany his wife Sutapa Sikdar in the gaming session. On Friday, Sutapa took a stroll down memory lane and shared a throwback video of Irrfan eating something while his team and the former plays cards. Remembering Irrfan, Sutapa also mentioned that Irrfan was not well when the particular clip was taken on the sets of his last film `Angrezi Medium`. “Three years ago with Irrfan`s team in London shooting… he was not well this particular day but who can tell… hated playing cards but tirelessly witnessed reading his book and saw us playing even in the make up van

. I crave for your indulgences,” Sutapa captioned the clip, wherein we can see everyone listening to the iconic song `Ude Jab Jab Zufein Teri`. The highlight of the video is of Irrfan smiling when Sutapa told him, `kitna meetha hai yeh gaana (how sweet is this song)`. Irrfan`s video has left many social media users emotional. “That smile when he agrees with the gaana being meetha,” a user commented. Irrfan left for heavenly abode on April 29, 2020, after a long battle with cancer.

In the movie, he played the role of a doting father to his daughter who dreams of flying off to London for her further studies. Champak Bansal goes to any extent to keep his daughter happy and wishes for the best in her life. He is shown as a man that sees nothing in front of her daughter’s happiness in Angrezi ‘Medium’.

For the unversed, Irrfan died last year after battling a neuroendocrine tumour for two years.