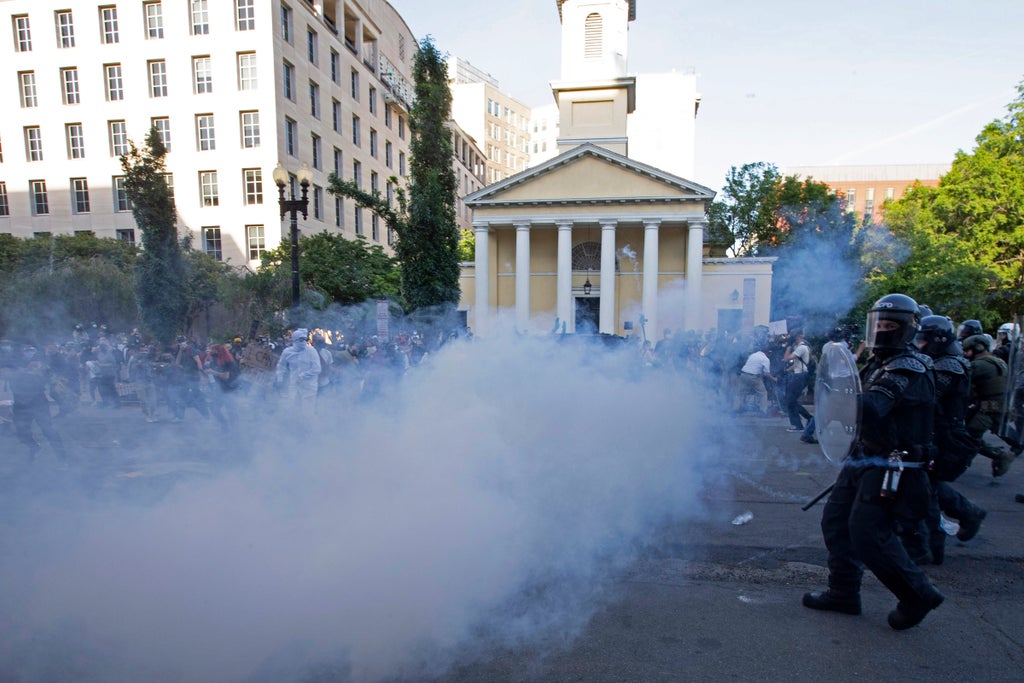 Donald Trump got aides to draft an order allowing him to use troops against George Floyd protesters, says a report.

White House aides drafted a proclamation that the former president would use to invoke the Insurrection Act in case he decided to deploy active-duty troops to end racial injustice protests in Washington DC, sources told <em>The New York Times</em>.

The proclamation was reportedly drawn up on 1 June 2020 as the administration struggled to deal with the fall-out from the killing of Mr Floyd.

An angry Mr Trump had told then-attorney general William Barr, Defense Secretary Mark Esper and chairman of the Joint Chiefs of Staff, General Mark Miley, that he wanted troops on the streets of Washington DC, one official told the newspaper.

The three officials talked Mr Trump out of that course of action but White House staffers decided to draw up the necessary document in case the situation in the city worsened.

Mr Trump never invoked the Insurrection Act and told the newspaper in a statement that he never wanted to deploy troops.

“It’s absolutely not true and if it was true, I would have done it,” said Mr Trump.

Later on the same day Mr Trump would walk from the White House across Lafayette Park to St John’s Church, where he would pose for photos while clutching a Bible.

Protesters were controversially cleared from the park with the use of tear gas and smoke bombs.

A federal watchdog stated earlier this month that United States Park Police had planned to clear the park before they were told that Mr Trump planned to walk through it.

A federal judge has also dismissed most of the claims in a lawsuit against Mr Barr and other government officials, which claims protesters had their civil rights violated.

But the judge has allowed the cases against the USPP to go ahead.