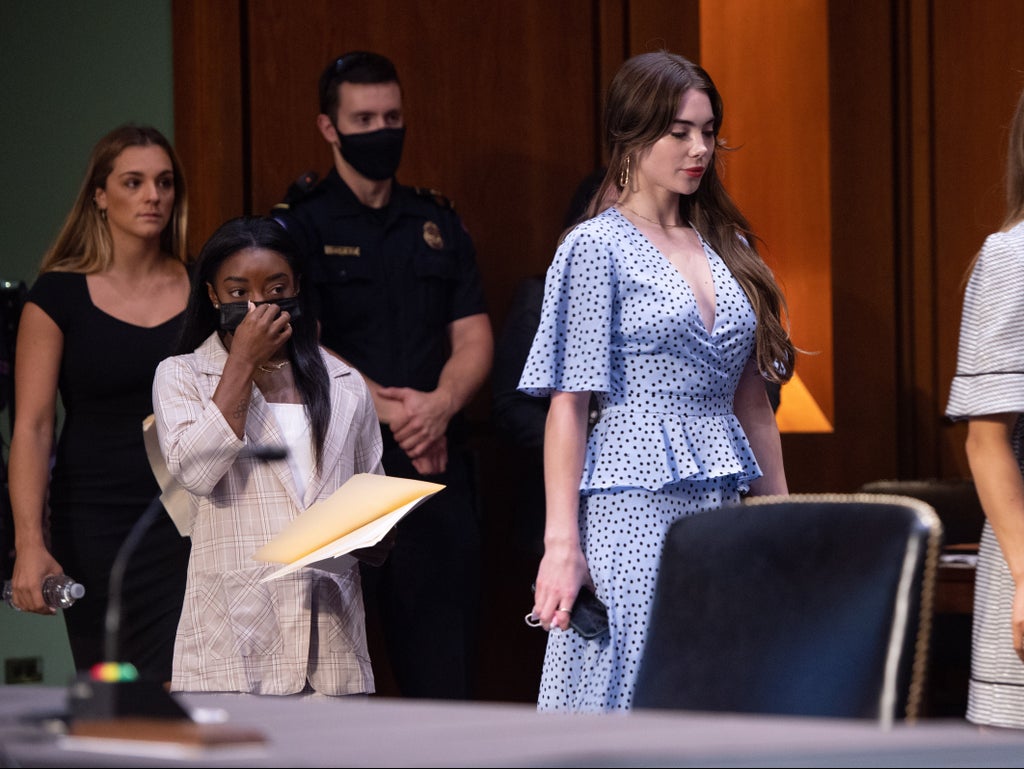 Survivors of convicted former US Gymnastics team doctor Larry Nassar’s abuse testified before the Senate Judiciary Committee to express their shock and anger at the FBI’s handling of the federal investigation into Mr Nassar.

And while FBI Director Christopher Wray answered questions about his response to the Justice Department Inspector General’s report into the FBI’s handling of the case at the hearing on Wednesday, many of the lawmakers had questions for the DOJ itself as to why it declined to prosecute two FBI agents referred for criminal prosecution over their conduct in the case.

Those questions went unanswered as neither Attorney General Merrick Garland nor any other official at DOJ appeared at Wednesday’s hearing, a decision that evoked exasperation and anger from the members of the Senate panel.

Chief among the Department of Justice’s most outspoken critics was Sen Richard Blumenthal, a Democrat, who told gymnasts Simone Biles, Aly Raisman, Maggie Nichols and McKayla Maroney that they were owed an explanation by the absentee officials.

“Those [criminal] referrals were declined…without any public explanation at all,” said the senator. “My hope is that the Department of Justice, which was invited to attend today and has declined to appear, will match your courage by explaining why those lies by FBI agents did not lead to criminal prosecution and accountability.”

“They owe the American people and you an explanation,” he continued.

At times the hearing saw raw and emotional testimony, both when the gymnasts described the abuse by Mr Nasser and during descriptions of the responses of FBI agents assigned to investigate their claims, whose actions and words the athletes said were cold and callous.

“What is the point of reporting abuse if our own FBI agents are going to take it upon themselves to bury that report in a drawer?” asked Ms Maroney during her prepared opening statement. “They had legal legitimate evidence of child abuse and did nothing. If they’re not going to protect me, I want to know who are they trying to protect.”

“Not only did the FBI not report my abuse, but when they eventually documented my report 17 months later, they made entirely false claims about what I said,” she continued, visibly angered.

Ms Nichols accused the FBI, and two US organisations involved with the case, of betraying her and other victims.

“USA Gymnastics, the United States Olympic and Paralympic Committee, and the FBI have all betrayed me and those who were abused by Larry Nassar,” she said. “The survivors of Larry Nassar have a right to know why their well-being was placed in jeopardy by these individuals who chose not to do their jobs.”

And Ms Biles was brought to tears when telling the committee in her own prepared statement that she hoped no other athlete or individual would ever face the ongoing trauma that she and others faced as a result of Mr Nasser’s actions and the failures of investigators.

“I don’t want another gymnast, Olympic athlete or any individual to experience the horror that I and hundreds of others have endured before, during, and continuing to this day,” she said, before breaking down with emotion.

“To be clear, I blame Larry Nassar and I also blame an entire system that enabled and perpetrated his abuse,” she continued a moment later.

In his attempts to respond to the witnesses and committee members after the panel returned from a break for lunch, FBI Director Wray said he could not explain or go into his discussions with the Justice Department regarding their decision not to prosecute the two FBI agents singled out by the inspector general, and added that it was a “frustration” that a third former agent involved in the case could not face disciplinary action due to having retired.

“We have made some real doozies of mistakes over 113 years,” Mr Wray said during a response to Sen John Cornyn. “What I would say to those women is that I’m so deeply for sorry for what our folks did and more importantly didn’t do back in 2015.”

During questioning by committee members, Ms Raiman and Ms Biles offered a path forward for the three entities – USA Gymnastics, the US Olympic and Paralympic Committee, and the FBI – which saw their reputations heavily tarnished in the wake of the massive scandal, which in total is believed to have involved hundreds of victims, including many after the first allegations of sexual abuse were raised.

“I think a complete and full independent investigation of the FBI, USA Gymnastics, and the United States Olympic and Paralympic Committee [is necessary],” Ms Raisman said, explaining: “And then from there, we should know the answers of who should be held accountable.”

Ms Biles added: “We want to see them…federally prosecuted to the fullest extent”.

Mr Nassar currently resides in a federal prison in Florida, serving out a 60-year sentence. He also faces a sentence of 40-125 years in a Michigan state prison for a second conviction should he ever be released.

At his second trial in early 2018, a Michigan judge famously declared that she had signed his “death warrant” by imposing the lengthy second sentence, virtually assuring that Mr Nassar will never live as a free man again.