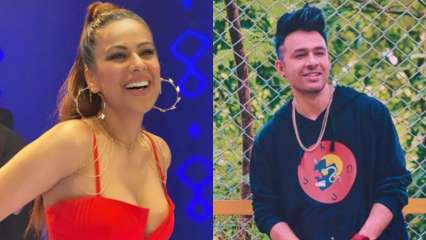 TV star Nia Sharma recently reunited with singer and composer Tony Kakkar at the success party of the latter’s new song ‘Kaanta Laga’. Nia and Tony who have previously collaborated on a music video ‘Waada’, performed to the old track at the bash and left the onlookers impressed with their bond.

On Wednesday, Nia Sharma gave her fans a glimpse of her intimate dance performance with Tony Kakkar when she shared a video clip on Instagram which is now going viral on social media. In the video, Nia who is seen dressed in a backless sexy red gown holds Tony’s hand and performs a couple dance with him as he keeps singing the ‘Waada’ song.

Alongside the video in which Nia Sharma is seen dancing with Tony as he sings the song ‘Waada’, the ‘Jamai Raja’ actress wrote in the caption, “Re-living this beautiful song ‘Wadaa’ that we did years ago @tonykakkar …. you’ve come such a long way…..To only creating ‘Trends’ today More power to you:) @anshul300 Thank you.”

“Thank you @niasharma90 for making it special. Much love to you,” Tony wrote in reply to Nia.

On a related note, Tony Kakkar’s ‘Kaanta Laga’ success party was also attended by Avneet Kaur, Neha Kakkar and Sunil Grover among others.

As for Nia, she recently treated her fans with photos from Grah Pravesh and Ganesh Chaturthi celebrations from her new home in Mumbai.

Earlier, Nia spoke about being out of work for several months after her show ‘Ek Hazaaron Mein Meri Behna Hai’ went off the air. In an interview with radio host Siddharth Kannan, Nia said, “When I came to this industry, I was all by myself. I was fresh from Ek Hazaaron Mein Meri Behna Hai, which was the show that made me. Uske baad poora ek saal ka gap tha (After that, there was a gap of a year).”

Nia made her TV debut with a lead role in ‘Kaali – Ek Agnipariksha’. She was last seen in the web series ‘Jamai Raja 2.0’ opposite Ravi Dubey. Nia has also featured in music videos such as ‘Ankhiyaan Da Ghar’, ‘Tum Bewafa Ho’ and ‘Do Ghoonth’.