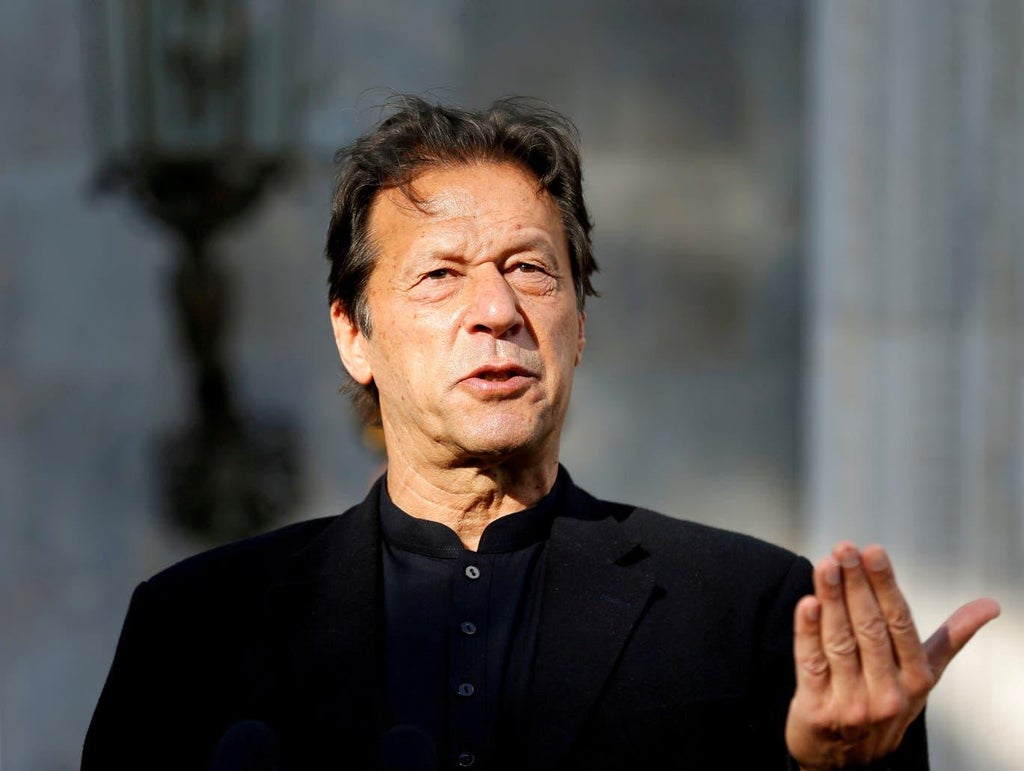 The Taliban should be “incentivised” to push them in the right direction on issues related to women’s rights and forming an inclusive government, instead of trying to control them from the outside, according to Pakistan prime minister Imran Khan.

Mr Khan, in an interview with CNN on Wednesday, also said women should be given time for them to “get their rights”.

“Afghanistan is on a historic crossroads,” Mr Khan was quoted as saying in the interview. “The Taliban hold all of Afghanistan, and if they can sort of now work towards an inclusive government, get all the factions together, Afghanistan could have peace after 40 years.”

But his biggest worry is that if things go wrong now after the Taliban takeover, then “it could go to chaos” and would lead to the biggest humanitarian crisis, a huge refugee problem, an unstable Afghanistan and the possibility of terrorism on the country’s soil.

Mr Khan said the Taliban clearly want “international acceptability” given the promises they have made of an inclusive government, women rights and giving amnesty, but they should be given more incentives instead of external pressure.

“So rather than sitting here and thinking that we can control them, we should incentivise them. Because Afghanistan, this current government, clearly feels that without international aid and help, they will not be able to stop this crisis. So we should push them in the right direction,” he said.

Protests have been flaring in Afghanistan as hundreds of women take to the streets to protest against the Taliban-ruled government to demand rights for themselves.

While the Taliban has repeatedly promised an inclusive government and rights to women since capturing power, these promises have been seen to be in stark contrast from the situation on the ground. The unveiling of an all-male interim government also stands contrary to the Taliban’s promises.

Mr Khan was of the opinion that the country’s women were “strong” and that they should be given time to get back their freedoms.

“It’s a mistake to think that someone from outside will give Afghan women rights. Afghan women are strong. Give them time. They will get their rights,” said Mr Khan.

“Women should have the ability in a society to fulfil their potential in life,” he added.

Speaking about Pakistan’s “terrible” relationship with the US, he said Islamabad was treated like a “hired gun” by Washington during the entire duration of the 20-year war in Afghanistan.

“We were supposed to make them [the US] win the war in Afghanistan, which we never could,” he said.

Mr Khan said he would now like ties between the two countries to be “like the US has a relationship with India” and not a “one-dimensional relationship where they are paying us to fight. We want a normal relationship.”

On Monday, US Secretary of State Antony Blinken accused Pakistan of “hedging its bets constantly about the future of Afghanistan” by harbouring Taliban terrorists during their war in Afghanistan while supporting the US in counterterror operations.

He said Washington would reassess its ties with Islamabad going forward and told Congress that Pakistan had a “multiplicity of interests some that are in conflict with ours.”

Mr Khan dubbed the comments by Mr Blinken to be ignorant. “I have never heard such ignorance,” he said.

The prime minister also pointed out that US president Joe Biden had not spoken to him since the Taliban took control of Kabul. When asked if he thinks he was being “punished” for supporting the Taliban, Mr Khan felt Mr Biden should be asked this question.

“I would imagine he’s very busy, but our relationship with the US is not just dependent on a phone call, it needs to be a multidimensional relationship,” he said.

Mr Khan’s government has consistently rubbished allegations of supporting the Taliban in the US’s “war on terror” and has instead sought to portray itself as a victim of the war.

“Just because we sided with the US, we became an ally of the US after 9/11 and the war in Afghanistan. The suffering this country went through with at one point there were 50 militant groups attacking our government (sic)… on top of it, they must also know there were 480 drone attacks by the US in Pakistan,” he added.