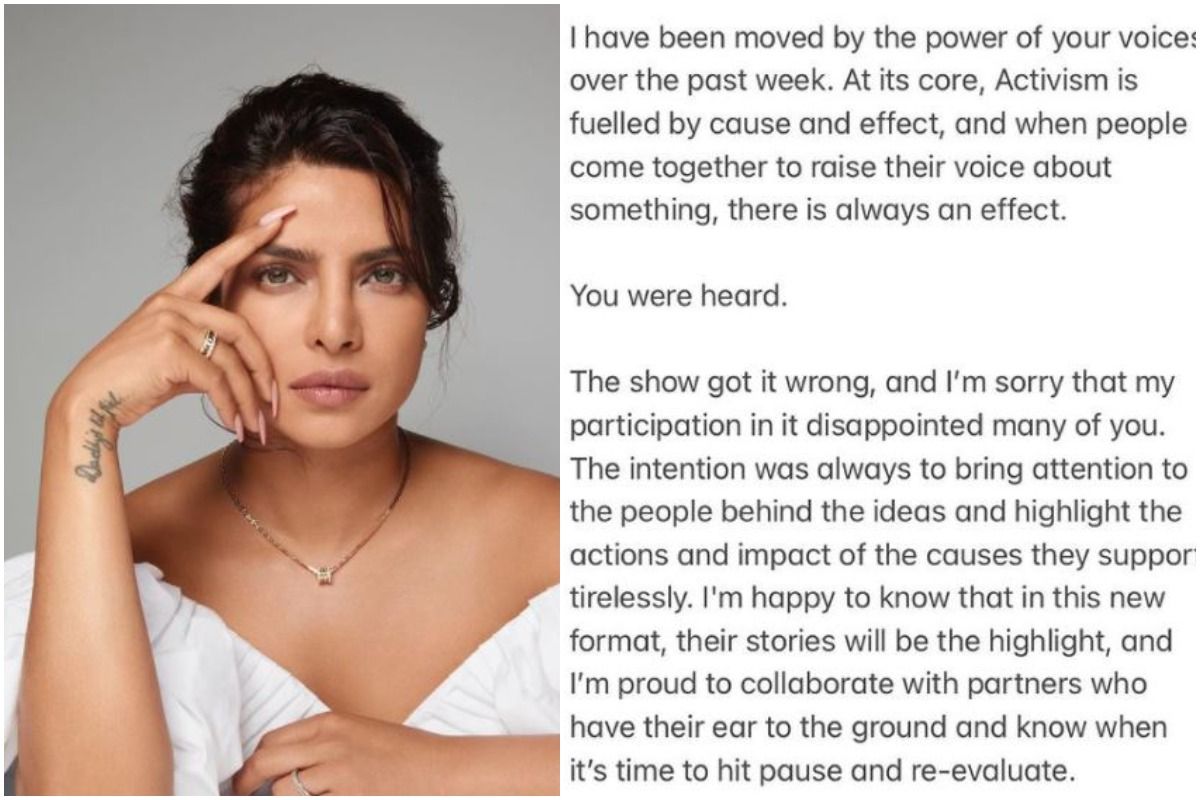 The Activist Controversy: Global icon Priyanka Chopra Jonas took to social media and issued a statement regarding the ongoing ‘The Activist’ controversy. PeeCee apologised to her fans for her association with the show that has disappointed many people. Priyanka, along with singer-songwriter Usher and dancer Julianne Hough is one of the hosts of the show.Also Read – Priyanka Chopra Becomes Member of Producers Guild Of America, Expresses Her Gratitude

Priyanka Chopra apologised to her fans and mentioned that that intention was to bring attention to the people who work tirelessly behind the ideas. “I have been moved by the power of your voices over the past week. At its core, Activism is fuelled by cause and effect, and when people come together to raise their voice about something, there is always an effect. You were heard. The show got it wrong, and I’m sorry that my participation in it disappointed many of you. The intention was always to bring attention to the people behind the ideas and highlight the actions and impact of the causes they support tirelessly. I’m happy to know that in this new format, their stories will be the highlight, and I’m proud to collaborate with partners who have their ear to the ground and know when it’s time to hit pause and re-evaluate,” the actor wrote. Also Read – Priyanka Chopra Celebrates 21 Years of Friendship With Lara Dutta, Says ‘She is a Big Part Of My Story’

Priyanka also talked about how activists work hard day and night without their work getting acknowledged. She added that it is crucial to celebrate their efforts and wrote, “There is a global community of activists who fight the fight every single day and put their blood, sweat and tears into creating change, but more often than not, they are rarely heard or acknowledged. Their work is so important and they too deserve to be recognized and celebrated. Thank you to each and every one of you for all that you do.” Also Read – Priyanka Chopra Breaks The Internet With a Hot Photo in Bikini, Nick Jonas Writes ‘Yummy’

What is ‘The Activist’ controversy all about?

‘The Activist’ is a show which is facing mega backlash ever since its announcement. The show revolves around three teams of activists who will compete against each other for their causes. However, this disappointed people who alleged that the show must be based on cooperation and not on competition. Fans also slammed the show for being tone-deaf and insensitive.

The “Activist” tv show had bad direction. However, I think something more focused on showcasing different ideas to help a community, would’ve been better. Of course, without the conception part. How about invest in all ideas instead of one.

.@CBS a one time special documentary for #TheActivist ? Maybe, if you want the show to “inspire real change” (as you said in press material), why not focus on that instead of being a ratings darling? Try interviews with activists and ways to get involved

The format of the show, ‘The Activist’ changed

Following the backlash, CBS and producing partners Global Citizen and Live Nation issued a statement announcing the change in the show’s format. The show will now be in a documentary format as the competition aspect has been removed. Even the premiere date of the show has been postponed and the new date will be announced soon. Earlier, The Activist was supposed to premiere on October 22.

“We are changing the format to remove the competitive element and reimagining the concept into a primetime documentary special (air date to be announced), it will showcase the tireless work of six activists and the impact they have advocating for causes they deeply believe in. Each activist will be awarded a cash grant for the organization of their choice, as was planned for the original show,” the statement read.