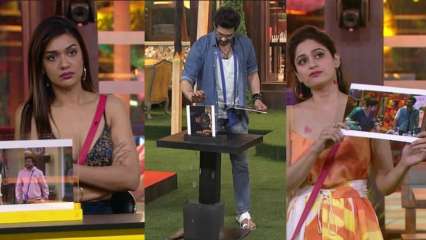 Bigg Boss OTT finale is nearing, and the excitement is increasing with every passing day! On today’s episode, contestants got emotional as they went down memory lane. Bigg Boss announced a task called “The Memory Task”, wherein each contestant was called out in the garden area individually and were shown two memories from the past six weeks journey in the house and were also presented with two images of those moments.

Every contestant got the chance to relive their moments spent in the house, but there was a twist, each housemate had to choose between the two memories, one that they want to keep and one they would like to delete before leaving the house.

The first contestant to go down the memory lane was Nishant Bhat and he was kept in a spot between Pratik Sehajpal and Raqesh Bapat. The choreographer was shown the sweet moment of his friendship with Pratik and moments where he and Raqesh had a tiff. Nishant decided to shred an ugly fight and a memory with Raqesh in the house.

The second was Shamita Shetty who shreds the memory with Raqesh Bapat!! Yes, it was shocking to see Shamita do so, but her reason was valid. She saw a video in which there were many fights with Raqesh and she clearly didn’t want to take the bad memories home. She rather chose a memory with Divya Agarwal and their fights.

Next in the line was Pratik who was kept in the spot with two situations between Neha and Nishant where he was shown sweet memories shared with both the contestants. His decision to keep the memory with Neha and shred Nishant’s picture was overwhelming for Pratik as it was a tough decision to make but his explanation won hearts of the housemates.

Next up was Raqesh whose first memory was with Divya where she can be seen crying about playing the show alone while his second memory was his sweet and adorable moments with Shamita. He shreds Divya’s memory and said he felt bad about not supporting her enough on the show.

Divya got the toughest choice to make amidst all contestants, as she had to choose between two friends whom she equally loves and respects, Raqesh and Nishant. She was shown memories where she fought with and were accused by both the contestants.

Hosted by Karan Johar, the grand finale of ‘Bigg Boss OTT’ will be held on Saturday (September 2021).