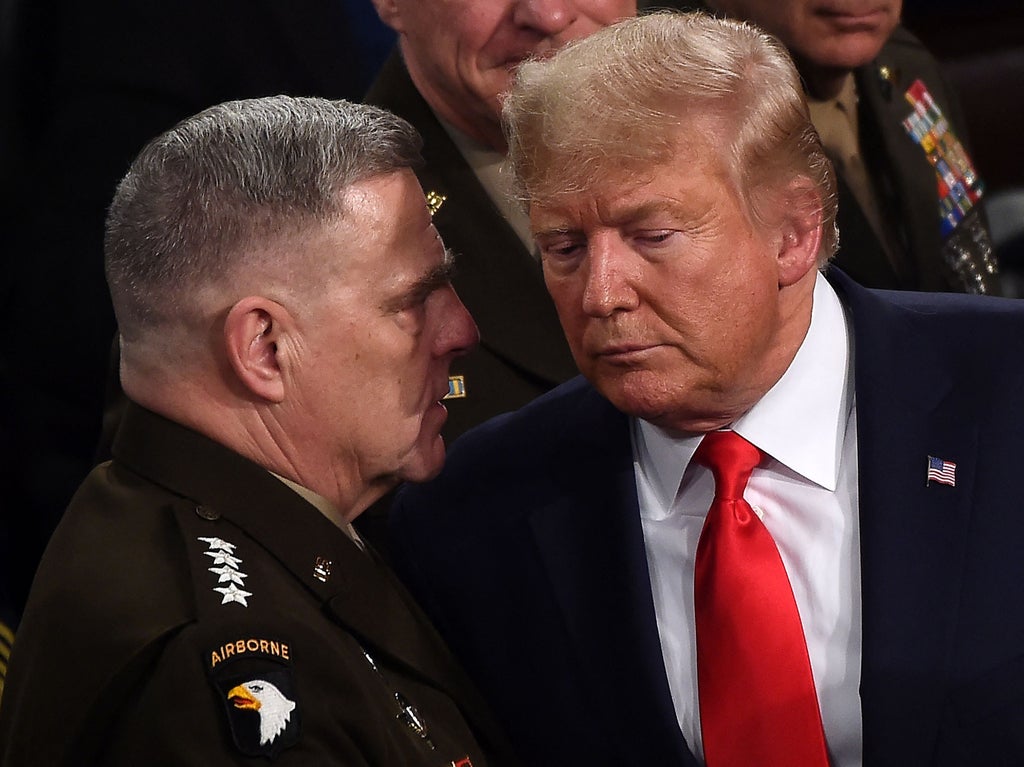 Nearly eight months after Donald Trump’s presidency ended, a succession of new books have revealed stunning details about the end of his tumultuous four years in the White House. Toward the end of his term, Mr Trump’s behaviour became so concerning to top US officials that they began to question whether Mr Trump’s mental stability would be so compromised after losing the 2020 election that he would take the country into war.

House Speaker Nancy Pelosi was so incensed by Trump supporters’ invasion of the Capitol that she told Chairman of the Joint Chiefs of Staff General Mark Milley that she called the president a “dictator” who should have been arrested for attempting a coup d’etat. And Gen Milley himself was so troubled by how Mr Trump’s antics looked to foreign adversaries that he began a series of back-channel calls with his Chinese counterpart to assure him that the US government was stable and that Mr Trump would not launch an attack against Beijing.

These are just some of the new details revealed in Peril, a forthcoming book by Washington Post writers Bob Woodward and Robert Costa. The Independent obtained a copy of the book ahead of its 21 September publication date. Here are some of the book’s most explosive revelations.

After a mob of Trump supporters stormed the US Capitol in an attempt to prevent Congress from certifying President Joe Biden’s electoral college victory on 6 January, Mr Woodward and Mr Costa write that Gen Milley became so concerned that Mr Trump would “go rogue” and order a nuclear strike on China at some point before he left office on 20 January at noon.

Two days after the attack on the Capitol, Gen Milley convened a meeting of senior officers in charge of the National Military Command Center to review the formal process for initiating military actions, including the release of nuclear weapons.

Gen Milley told the officers that they were to disregard any orders that did not involve him.

“No matter what you are told, you do the procedure. You do the process. And I’m part of that procedure,” Mr Milley reportedly said before looking each one in the eye and asking them to verbally confirm that they had understood him.

When a pro-Trump horde was rampaging through the US Capitol, Michigan Representative Elissa Slotkin contacted Gen Milley by phone from where she and many of her colleagues took shelter from the mob.

When Ms Slotkin told the general that he needed to get National Guard to the building, Mr Milley replied that help was on the way, and added that he’d informed Vice President Mike Pence – not the president.

He told Ms Slotkin that he believed Mr Trump had wanted the riot to occur and was enjoying it, according to the book.

Ever since President Ronald Reagan left a handwritten note for incoming President George HW Bush in January 1989, the practice of one American leader passong on a message for their successor has become a tradition that personalises the peaceful transfer of power in the American system.

But that tradition almost came to a halt when Mr Trump lost his bid for re-election. According to the book, Mr Trump only decided to pen a handwritten message for Mr Biden after weeks of urging from House Minority Leader Kevin McCarthy.

When Mr McCarthy and Mr Trump spoke at 10pm the night before Inauguration Day, Mr Trump told him that he’d finished the note, but refused the California Republican’s entreaties to place a call to Mr Biden.

Mr McCarthy reportedly told him it would be “important for the country” for the incoming and outgoing presidents to speak to “make the transition real”, since Mr Trump prevented administration officials from cooperating with Mr Biden’s transition team until long after it was clear that the election was over and he had lost.

Senator Lindsey Graham once called the former president “a race baiting, xenophobic religious bigot”, but the South Carolina Republican would become one of Mr Trump’s closest allies on Capitol Hill.

According to Mr Woodward and Mr Costa, Mr Graham has continued to speak with Mr Trump regularly during his post-presidency and counts him as an ally, but their alliance has had some rocky moments.

During one midsummer phone call between the two men, Mr Graham reportedly criticised his close ally for perpetuating lies about the 2020 election.

“You keep saying the election was rigged and you were cheated –– you lost a close election,” the senator continued, according to the book.

After he told Mr Trump “You f***** your presidency up,” the twice-impeached former president reportedly hung up the phone.

During one White House meeting, Mr Trump reportedly said that Jared Kushner, the White House senior adviser who is married to his daughter Ivanka, “is more loyal to Israel than the United States”.

Mr Kushner, an observant Jew whose family owns and operates a large real estate business, was tasked with handling the Trump administration’s Middle East peace strategy early on in his father-in-law’s presidency. And while his family does have deep personal and financial ties to the Jewish state, Mr Kushner is an American citizen and does not hold dual nationality with Israel.

Mr Trump’s use of what the Anti-Defamation League characterises as an anti-semitic trope was nothing new for the now-former president, who on multiple occasions accused Jewish-Americans who vote for Democrats of being disloyal to Israel and implied that Jewish-Americans should vote based on the interests of a country that is not their own.

A few months before he would lose the 2020 election, Mr Trump told a group of Jewish-American leaders on a White House conference call marking the Jewish new year that Jews should vote for him because Democrats would be bad for Israel, adding “we love your country”.

While he angrily told a reporter for an Orthodox Jewish weekly magazine that he was “the least anti-Semitic person that you’ve ever seen in your entire life,” Mr Trump’s his presidency was marked by a significant rise in anti-semitic activity, including the August 2017 “Unite the Right” rally in Charlottesville, Virginia, during which marchers chanted “Jews will not replace us” and the October 2018 mass shooting at Pittsburgh’s Tree of Life synagogue.