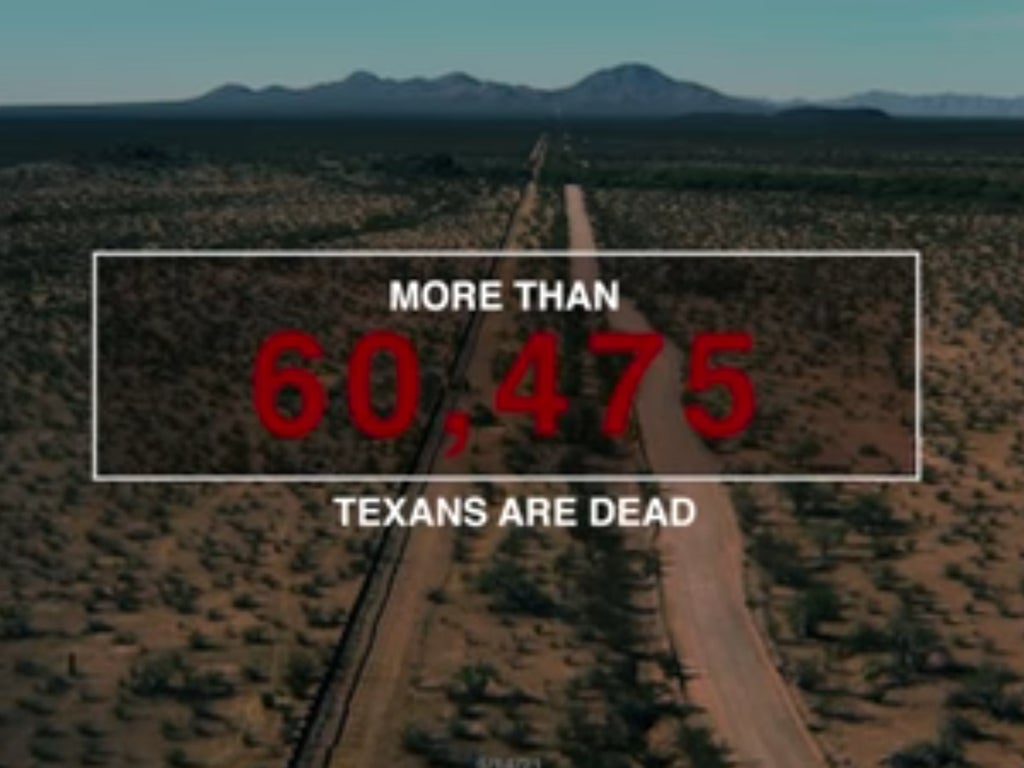 Gregg Abbott has been targeted in an advert by The Lincoln Project for his handling of Covid in Texas, which is currently witnessing around 16,000 new cases a day – and almost as many as during January and February.

The 60-second ad, which was released on Friday, accuses the Republican governor of “building a wall” of bodies instead of “the one he promised” – in an apparent nod to the southern US border with Mexico, which he and the Republican party have been vocal about.

Texas has so far seen more than 3.8 million cases of Covid-19, according to analysis by The New York Times, and as The Lincoln Project reminds viewers, more than 60,000 deaths – and counting – from the disease.

Attacking Mr Abbott on the death toll in Texas, the ad begins with an announcement telling viewers that “Texas is now one of the leading states in Covid deaths”. The number of infections and fatalities then flicker on the screen, turning red.

“Over 60,000 Texas are buried,” it continues, before comparing the death toll to the size of a “cemetery that would stretch from Austin to San Antonio” – a distance of about 80 miles (129 km).

The ad finishes by saying that the bodies of Texas’ Covid dead would amount to roughly “3.6 million feet of casket lumber”, which is “enough lumber to build a wall 85 miles long”.

“If Governor Abbott wants to build a new wall,” the Lincoln Project argues, “tell him to stop building this one”.

Texas has been reporting more than 10,000 Covid infections a day for more than a month, with governor Abbott himself forced to isolate after he tested positive for Covid in August – and after receiving both vaccinations.

Roughly 70 per cent of Texans have been vaccinated against Covid, according to the health department, and 59 per cent are fully vaccinated – a number 5 per cent more than the American average.

Mr Abbott has rejected mask mandates, and went as far as making it illegal for local governments to issue them – in an apparent rebuttal of advice from the US Centres for Disease Control and Prevention, and medical professionals, who argue that masks reduce Covid spreading.

The Independent has approached Mr Abbott’s office for comment.