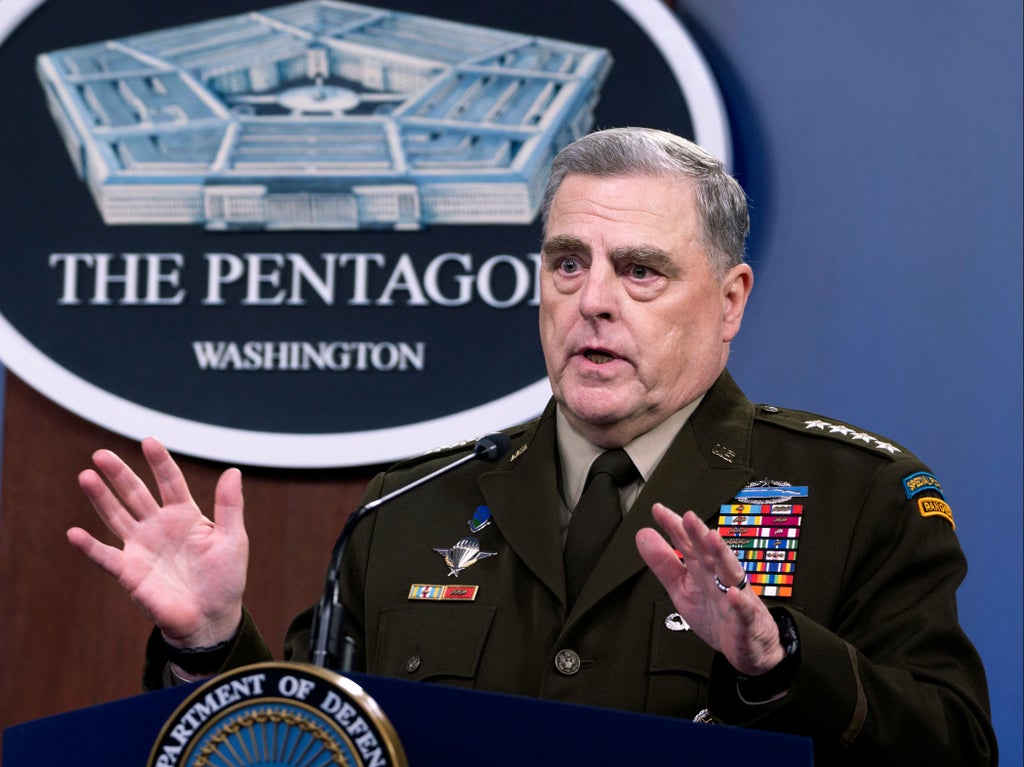 Gen Mark Milley is likely to hang on as chairman of the Joint Chief of Staff, despite repeated criticisms from Republicans about his conduct before and after the 6 January riot at the US Capitol.

On Friday, Gen Milley defended calling the head of the Chinese army to assure him the United States would not attack China and that Gen Milley would warn General Li Zuocheng if it were to happen in both October and January. The meetings were first reported in Bob Woodward and Robert Costa of The Washington Post in their upcoming book Peril.

Similarly, President Joe Biden has expressed his “great confidence” in the four-star US Army general who was nominated by former president Donald Trump. Gen Milley has come in for criticism over the revelations in Peril, with some Republicans calling for his resignation. Later this month, on 28 September, members of the Senate Armed Services Committee are set to grill the top US military official.

“He has a four-year term but he serves at the pleasure of the president and when the pleasure is gone, so is he,” said Peter Feaver, a professor at Duke University who has researched civil-military relations. “That puts a stop to the death watch.

Heather Hurlburt, who worked for the White House and the State Department during the Clinton administration, said that the anecdote was indicative of a larger problem regarding Mr Trump.

“That both his decision-making process and his decisions were deeply problematic, but all the channels the Constitution envisages to deal with that were unavailable,” she said. She also noted how Senate Minority Whip Dick Durbin told reporters that Gen Milley’s actions were “circumspect” but at the same time, many members “made it clear that we were counting on him to avoid the disaster which we knew could happen at any moment.”

“So basically there you have a senior elected official encouraging a senior military official to ignore the chain of command,” she said. While Ms Hurlburt said she was glad the US avoided conflict with China, she cautioned Democrats to imagine their own response if a Republican senator like, say, Lindsey Graham publically indicated he was counting on Gen Milley to block Mr Biden’s win.

At the same time, Gen Milley has become the subject of right-wing opprobrium since last year, when he apologised for accompanying then-President Trump for a photo opportunity at St John’s Episcopal Church after protesters were violently cleared from adjacent Lafayette Square. The general said at the time that he gave the impression that the US military was involved in domestic politics.

Gen Milley became a target for some on the right again earlier this year when he testified before the House Armed Services Committee and defended cadets at military academies studying topics like “white rage” and “critical race theory”.

“I personally find it offensive that we are accusing the United States military, our general officers, our non-commissioned officers of being quote ‘woke’ because we are studying some theories that are out there,” he said at the time.

That response led to Mr Trump, several months removed from office, saying Gen Milley needed to resign. Mr Trump condemned also Gen Milley at a rally last month for his performance leading the military during the US’ withdrawal from Afghanistan.

Lawrence Korb, a senior fellow at the Center for American Progress who has studied the chairman of the Joint Chiefs of Staff, said the outrage around Gen Milley regarding the book’s latest revelations is obviously political.

“A lot of people who like President Trump felt that ‘the blob,’ if you will, or the bureaucracy, was always trying to undermine him, and this is another indication that you even have a general trying to undermine him and his concerns were overstated,” Mr Korb said. “Politics is like theater, everybody plays a part.”