Maldives: Actor Alia Bhatt has dropped her hot bikini picture in a backless pink bikini as she wishes her BFF Akansha Rajan Kapoor on her birthday. On her BFF’s birthday, the Brahmastra actor shared a throwback picture from their latest holiday in the Maldives that the best friends took together in February this year and they were joined by Shaheen Bhatt, Alia’s elder sister.Also Read – RRR Released Postponed: Ram Charan, Jr NTR Starrer NOT To Release On October 13 | Here’s Why

In the photo, while Alia looked ravishing hot in a pink backless bikini teamed up with a sheer little matching skirt, Akansha looked gorgeous in a purple one-strap bikini teamed up with a black-white sarong. The two ladies can be seen sitting on the beach shore as they enjoy the picturesque location and sea waves. Also Read – Alia Bhatt’s Gangubai Kathiawadi, SS Rajamouli’s RRR to Get Theatrical Release,Makers Confirm 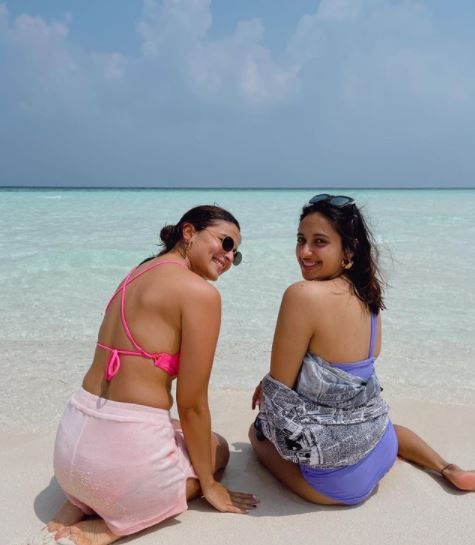 In February, Alia returned early from her Maldives vacation after her boyfriend Ranbir Kapoor’s uncle Rajiv Kapoor passed away.

Check Some of The Throwbacks From Their Vacations:

Meanwhile, on the work front, Alia Bhatt has several films lined up including Ayan Mukerji’s fantasy trilogy – Brahmastra, co-starring Ranbir Kapoor and Amiotabh Bachchan. She also has SS Rajamouli’s RRR with Ram Charan, Jr NTR, and Ajay Devgn. She will also be seen in Sanjay Leela Bhansali’s directorial Gangubai Kathiawadi. She will also star in Farhan Akhtar’s Jee Le Zaraa with Priyanka Chopra and Katrina Kaif, and Karan Johar’s Rocky Aur Rani Ki Prem Kahani with Ranveer Singh. She has completed the shooting of Darlings, which also marks her debut as a film producer.

Akansha Rajan Kapoor, on the other hand, made her acting debut with Netflix’s Guilty last year, that also starred Kiara Advani, Gurfateh Singh Pirzada and Taher Shabbir in pivotal roles. She also starred in Netflix’s Ray and was a part of Harsh Varrdhan Kapoor and Radhika Madan.