Endorsements are a big deal in Bollywood and no star shies away from promoting any product with their name and face on it. Earlier, advertisements for Pan Masala were dominated by Ajay Devgn, however, recently stars like Amitabh Bachchan, Shah Rukh Khan, Ranveer Singh have also joined the leagues.

However, Big B’s recent advertisement for Kamala Pasand with Ranveer Singh did not sit well with his fans who questioned his decision to act in it.

One user questioned Big B saying, “Amitabh Bachchan; why did you need to do pan masala ad? Sir, you are a perfect example for crores of people, crores of people are inspired by you. But you are sending the wrong message in society by promoting this pan masala,” while another user wrote, “What are you doing for money, what message you guys are giving to the country. Advertising of such substances should be stopped.” 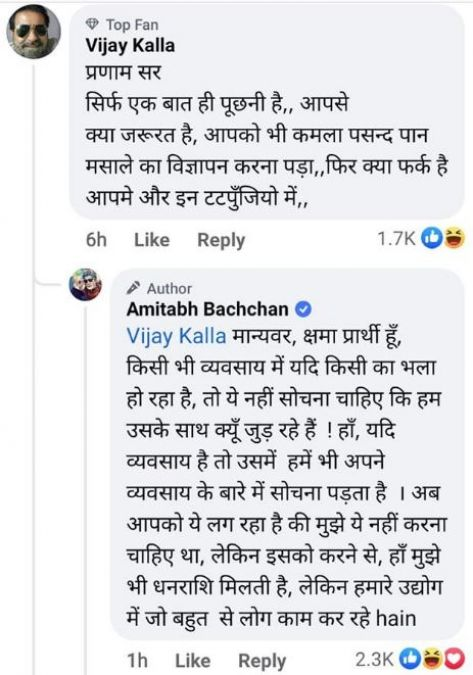 In response to his fans, in Hindi, Amitabh Bachchan said, “Sir, I am apologetic, if someone is doing good in any business, then we should not think about why we are joining in with them. Yes, if there is a business then we also have to think about our business in that. Now you feel that I should not have done this but by doing this, yes, I also get money. Such petty words neither suit you nor do they adorn other artists of our industry.”