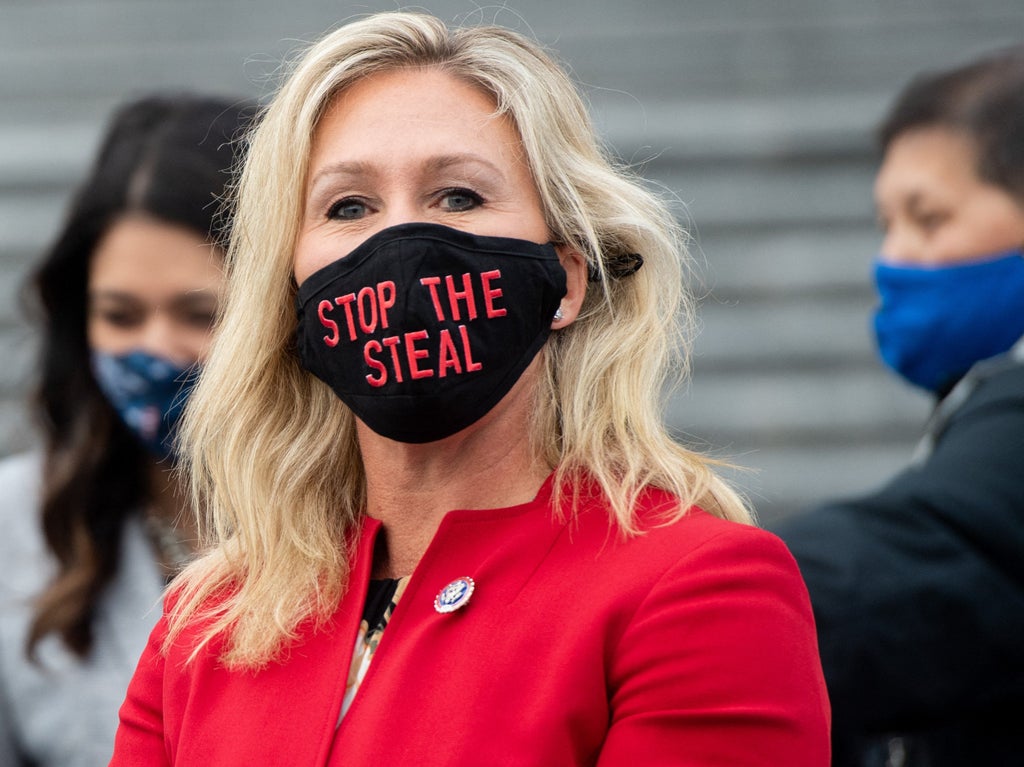 Congresswoman Marjorie Taylor Greene of Georgia is the latest Republican to try and put distance between the GOP, Donald Trump, and the 6 January riot at the US Capitol they inspired.

Asked by CNN’s Jim Acosta about recently released videos showing new angles on the mob attack at the Capitol, Rep Greene was evasive about admitting the crowd was largely Trump supporters, easily identifiable in their MAGA regalia.

The CNN anchor then pressed her on whether she saw the large contingent of Trump supporters at the event, many of whom have subsequently said in court directly that the former president inspired them to be there. Rep Greene dodged once again.

The GOP has in recent months staked much of its public messaging around defending the country from a figurative mob of left-wing protesters with ties to “antifa”, critical race theory, a host of other conservative bogeymen, but has sought to downplay its ties to the mob of far-right Trump fans who stormed their workplace and threatened their lives.

Last week, 21 House Republicans voted against awarding Congressional Gold Medals to the US Capitol police officers who defended them that day, earning criticism from even fellow Republicans like Adam Kinzinger, who wrote on Twitter following the vote: “How you can vote no to this is beyond me. Then again, denying an insurrection is as well. “

Last month, Republicans also blocked the passage of a bipartisan commission that would investigate the riot, expanding on the modest congressional inquiries already under way, a move criticised by relatives of Capitol police officers who were injured or killed on 6 January.

The GOP’s reluctance to engage further with the issue is perhaps due to its deep ties to the trends and figures that allowed the Capitol riot to take place in the first place. The fervent Trump supporters who stormed the Capitol were undoubtedly egged on by the former president and his congressional allies, who spent months claiming without evidence that the election was rigged, and largely haven’t moved on since.

Even after Congress was back in session, the night of the riots, more than 100 GOP House members, includingRep Greene, as well as multiple senators, voted to challenge the election results.

Despite the occasional criticism from moderate Republicans like Rep Kinzinger, the party has largely avoided striking out against Mr Trump, who remains extremely popular with the base and influential with the party.