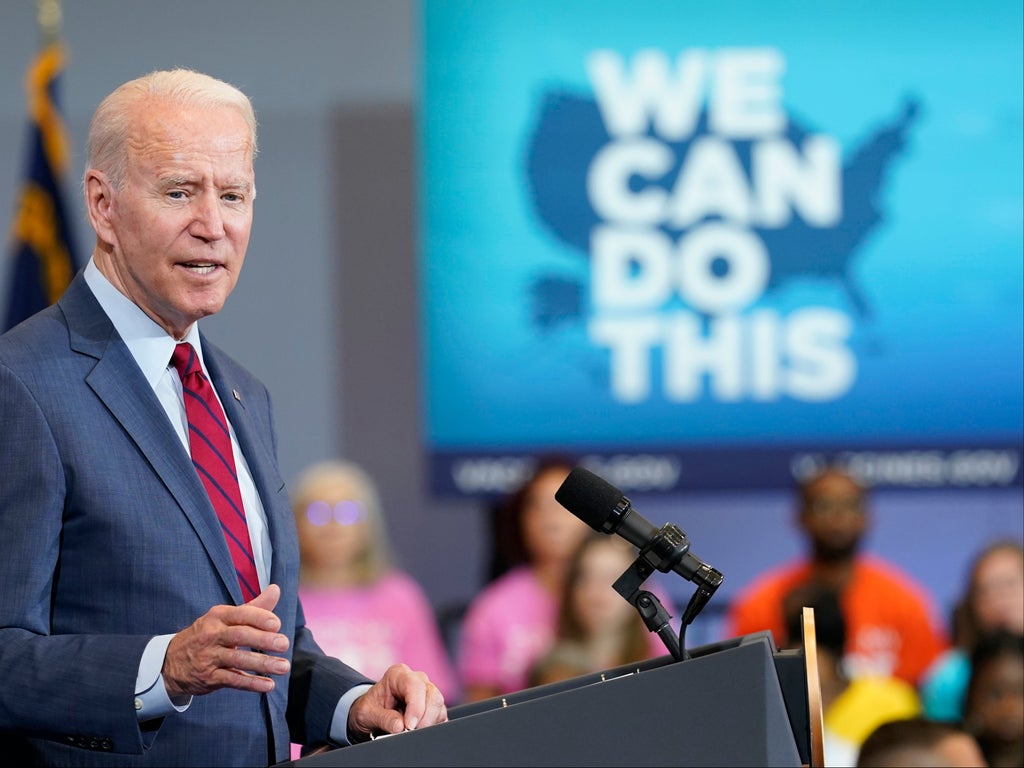 Joe Biden is walking back remarks that he wouldn’t sign the bipartisan $1.2 trillion infrastructure bill unless Congress also passed a much more contested family aid plan, following outrage from Republicans that threatened the fragile comprise.

“The bottom line is this: I gave my word to support the Infrastructure Plan, and that’s what I intend to do,” Mr Biden said in a statement on Saturday. “I intend to pursue the passage of that plan, which Democrats and Republicans agreed to on Thursday, with vigor.”

The Biden administration on Thursday announced it had negotiated a compromise with Senate Republicans for a $1.2 trillion infrastructure package, a rare bipartisan agreement in a congressional climate where the GOP has opposed virtually everything the administration has suggested, including the coronavirus relief bill which passed earlier this year without a single Republican vote.

Then, Mr Biden nearly tanked the agreement after saying he wouldn’t pass the infrastructure package unless it arrived alongside his American Families Plan, which invests in education, health care, child care, and other Democratic priorities.

“If they don’t (both) come, I’m not signing it. Real simple,” the president said.

That provoked instant condemnation from Republicans like Lindsey Graham, one of the GOP negotiators on the package.

“No deal by extortion!” he wrote on Twitter on Friday. “It was never suggested to me during these negotiations that President Biden was holding hostage the bipartisan infrastructure proposal unless a liberal reconciliation package was also passed.”

The White House defended its strategy.

“I have been clear from the start that it was my hope that the infrastructure plan could be one that Democrats and Republicans would work on together, while I would seek to pass my Families Plan and other provisions through the process known as reconciliation,” the president’s statement continued, referencing the reconciliation budgeting process, which only requires 50 votes to pass new actions, compared to the usual 60 needed to override a filibuster. “There has been no doubt or ambiguity about my intention to proceed this way.”

Fellow Democrats like representative Alexandria Ocasio-Cortez of New York accused Republicans of acting in “bad faith” over the two bills.

“Wow,” she tweeted, “who could have possibly predicted that Senate Republicans were wasting months of a Dem majority’s precious time negotiating in bad faith just to suddenly renege on a bipartisan agreement w/ new, mercurial demands after doing exactly the same w the Jan 6th commission.”

Progressives have also criticised the process from a different direction, arguing Mr Biden’s infrastructure package fails to make the sorts of transformative policy changes and investments in clean energy and transportation to tackle the climate crisis. Missing from the deal are Mr Biden’s original proposals on clean energy standards, tax credits for clean energy, a phase-out of fossil fuel subsidies, and investments in communities disproportionately affected by climate change.

“It is in no way, shape, or form a substitute for a comprehensive climate bill,” Leah Stokes, a UC Santa Barbara political scientist and adviser to the climate advocacy group Evergreen Action, told Vox. On its own, “it could even have some emissions increases, potentially.”

Democrats have promised to address these green priorities via separate reconciliation actions outside of the infrastructure plan.