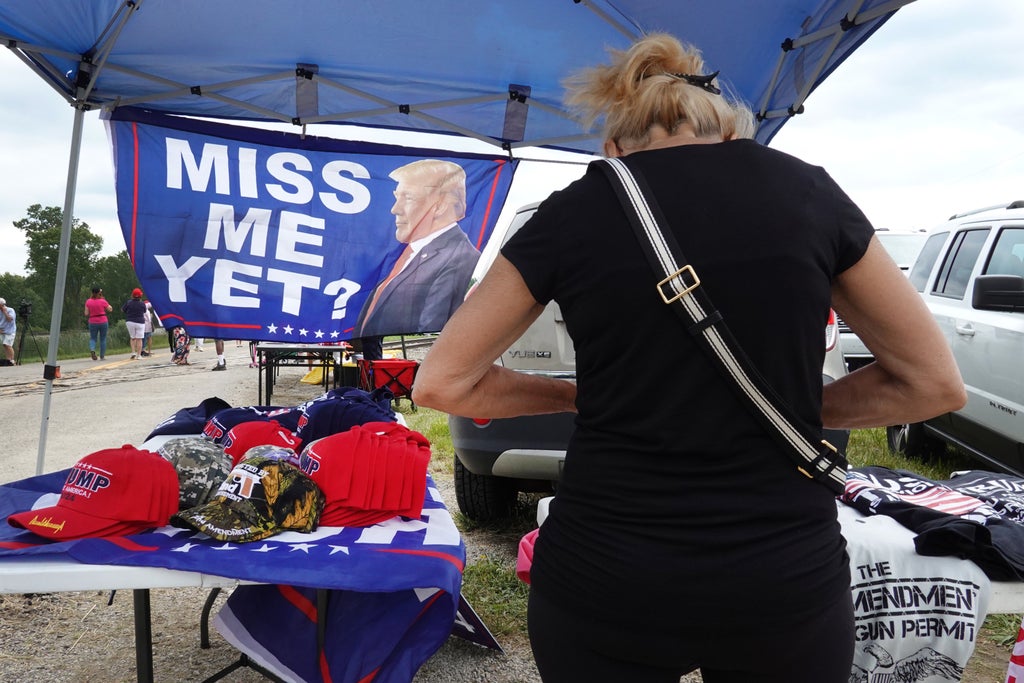 Donald Trump returned to familiar rants about a “rigged” 2020 election and lashed out at new targets like critical race theory and his own conservative Supreme Court at a comeback rally in Ohio, his first campaign-style event since leaving office in January.

He also vowed, as has been apparent for months now, that he would “never stop fighting” to challenge the 2020 election results, which numerous analyses, bipartisan expert testimonies, lawsuits, and audits have declared free of any meaningful irregularities.

“We’ll never stop fighting for the true results in this election,” the former president said. “I’m not the one trying to undermine American democracy. I’m the one that’s trying to save American democracy,” adding, “Who the hell knows what will happen in 2024? We’re not going to have a country left. If we don’t figure it out, we won’t be in a position to win in 2022.”

Chief among those standing in the way of his imagined victory in the 2020 election, Mr Trump said, was the Supreme Court, where he appointed three new justices and cemented a decisive 6-3 conservative majority.

The former president told the crowd in Wellington, Ohio, outside of Cleveland, that he was “ashamed” of the right-leaning high court he helped create. It was a likely reference to the fact they threw out multiple attempts from him and his allies to challenge the election.

Much like courts around the country, the high court rejected efforts from Mr Trump and his allies to overturn the 2020 election results.

Mr Trump also hit out at a more recent GOP preoccupation, critical race theory, an academic discipline that examines the influence of racism on law and society, which Republicans have misinterpreted as a sort of left-wing Black supremacy movement.

He referenced recent testimony from a top US military official, Mark Milley, Chairman of the Joint Chiefs of Staff, who went viral for defending the role of anti-racist education in the military and linking “white rage” to the attack on the US Capitol from Trump supporters this January.

“Our generals and our admirals are now focused more on this nonsense than they are on our enemies,” he said. “Do you see these generals lately on television? They are woke. Our military will be incapable of fighting and taking orders.”

“We need a Republican Congress to ban critical race theory,” he added.

The event was ostensibly to boost the candidacy of congressional candidate Mike Miller, a former White House aide challenging representative Anthony Gonzalez, an Ohio Republican who voted for Mr Trump’s second impeachment. But it was largely the Trump show on Saturday, with the former president fixating on favoured topics like the Space Force he created, and undocumented migration.

There, despite his own administration’s policies of intentionally separating families, Mr Trump criticised Joe Biden for being too hard on migrant youth who crossed the border alone, claiming without offering any evidence the children are on “suicide watch.”

“The illegal alien minors have arrived at our border, in many cases just wonder kids,” he said. “For the first time, they’re on suicide watch all because of the stupid policy you’ve been watching for the last few months.”

Like many of his statements, this has a kernel of truth wrapped in spin. Both the Trump and Biden administrations have separated migrant children from their families, undoubtedly traumatising them in the process. Mr Trump had family separation, and Mr Biden has for months retained Title 42, a Trump-era policy allowing border authorities to send back asylum seekers as a means of ostensibly fighting coronavirus, which has led to families sending children across the border alone.

Somehow, though, Donald Trump’s remarks managed not to be the most inflammatory things in Wellington on Saturday night. Georgia congresswoman Marjorie Taylor Greene was an opening speaker, and she invoked fascist and Islamophobic tropes, telling the crowd representative Alexandria Ocasio-Cortez was “not an American” and part of the “Jihad Squad.”

“The Democrats are now controlled by the jihad squad, led by AOC, the little communist from New York City,” Ms Greene said, in a likely reference to the so-called Squad, a group of progressive female legislators that includes Ilhan Omar and Rashida Tlaib, who are both Muslims. Ms Green has a history of targeted them with bigoted attacks, posing for an advert with an assault rifle pointed at their picture, and complaining about an “Islamic invasion” of the US government.

And this is only the beginning of the latest season of Mr Trump’s political TV show. He’s headed to Florida and the US-Mexico border as part of a multi-state tour ahead of the 2022 midterms, where he’ll play a major role as a power broker before a potential 2024 run at the White House.