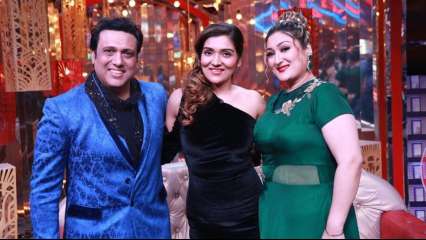 In the music reality show, ‘Indian Pro Music League’ Sunita opened up about her prolonged wish. She along with Govinda and their daughter Tina were special guests on a ninety’s special episode. Sunita shared that in their 36 years of marriage, she has seen Govinda as the “best brother, the best son, the best father and best husband”.

In the episode, the actor shared some great instances from his career. He danced to ‘What is your mobile number’ and ‘UP wala thumka’ and was surprised with messages from his fans, friends, and co-stars.

Reacting to the appreciation the actor said, “Thank you so much for this, seeing this video made so many memories came back. I must say that there are very few lucky people who get to serve their parents and get the chance to take care of them, I have been lucky that I got a chance to serve my parents. I am really thankful. I remember how my mother used to sing every day for us and our day would start with us listening to her beautiful voice,

Govinda also talked about his mother. He said, “People also used to ask her why she prays so much, but this dream of ours, getting home and being successful was the result of her, her hard work and her blessings. I never thought I would come out of that chawl, but it all happened because my mother believed in me.”

For the unversed, Govinda and Sunita got married in 1987. Apart from Tina, they also have a son name Yashvardhan.