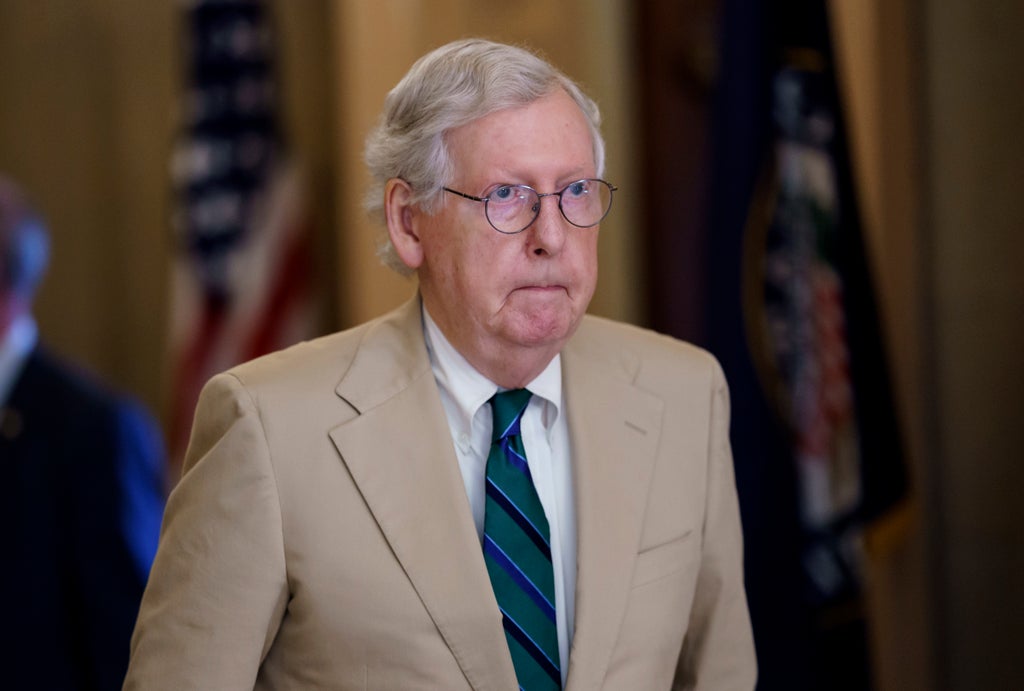 At the end of 2020, as Donald Trump continued to make false claims about a supposedly “rigged” election, Mitch McConnell reportedly urged then attorney general William Barr to publicly speak out, worried that trashing the electoral process could hurt the Republican party’s chances in upcoming runoff elections in Georgia which would determine who controls the Senate.

“Look, we need the president in Georgia,” Mr McConnell told Mr Barr, according to interviews for Betrayal, a new book from journalist Jonathan Karl, about the final days of the Trump administration, “and so we cannot be frontally attacking him right now. But you’re in a better position to inject some reality into this situation. You are really the only one who can do it.”

At the time, neither the Senate leader, who confirmed Karl’s account, nor the attorney general, believed Mr Trump’s debunked claims about the election.

“My attitude was: It was put-up or shut-up time,” Mr Barr told the reporter. “If there was evidence of fraud, I had no motive to suppress it. But my suspicion all the way along was that there was nothing there. It was all bulls***.”

That led the attorney general, normally a staunch Trump defender who stuck by the president and echoed his talking points on other issues like the Mueller investigation, to go out against his boss in a 1 December interview with the Associated Press, where he told the news agency: “To date, we have not seen fraud on a scale that could have effected a different outcome in the election.”

Neither GOP leader’s warnings were enough though. Both Republican candidates in Georgia lost in a historic upset, with Raphael Warnock and Jon Ossof becoming the first Democrats to win a Senate race in the state since the 1990s.

GOP officials had warned that the president’s repeated attacks on the integrity of the election, especially in swing states like Georgia, could hurt the party.

“You can’t say the system is rigged but elect these two senators,” Eric Johnson, a campaign adviser to Kelly Loeffler, one of the defeated Republican Senate candidates, told The New York Times in November. “At some point he either drops it or he says I want everybody to vote and get their friends to vote so that the margins are so large that they can’t steal it.”

Mr McConnell didn’t speak out against Mr Trump’s election claims until the morning of 6 January, telling his colleagues in the Senate he wouldn’t join them in opposing the results, the “most important vote I’ve ever cast.”

“Nothing before us proves illegality near the massive scale that would have tipped the entire election,” Mr McConnell said. “The Constitution gives us here in Congress a limited role. We cannot simply declare ourselves a national board of elections on steroids.”

Later that day, a mob of Trump supporters who’d been fed months of lies about a rigged election stormed the US Capitol.

The Senate leader later acknowledged that Mr Trump and his election conspiracies were to blame, telling Congress the man was “practically and morally responsible” because of the “crescendo of conspiracy theories” leading up to 6 January, though he declined to impeach the outgoing president over the Capitol attack.

And Mr Barr, despite his one-time stand against the president, has previously backed some of his other debunked election claims, telling CNN’s Wolf Blitzer that expanded mail-in voting would cause voter fraud, an essentially non-existent problem according to experts.

“We’re a very closely divided country here,” the former attorney general said. “People trying to change the rules to this, to this methodology — which, as a matter of logic, is very open to fraud and coercion — is reckless and dangerous and people are playing with fire.”

Mr Barr may reveal more about behind-the-scenes discussions following the election, as it was recently announced he’s working on a memoir, one of the few Trump officials to secure a book deal after the attack on the Capitol.