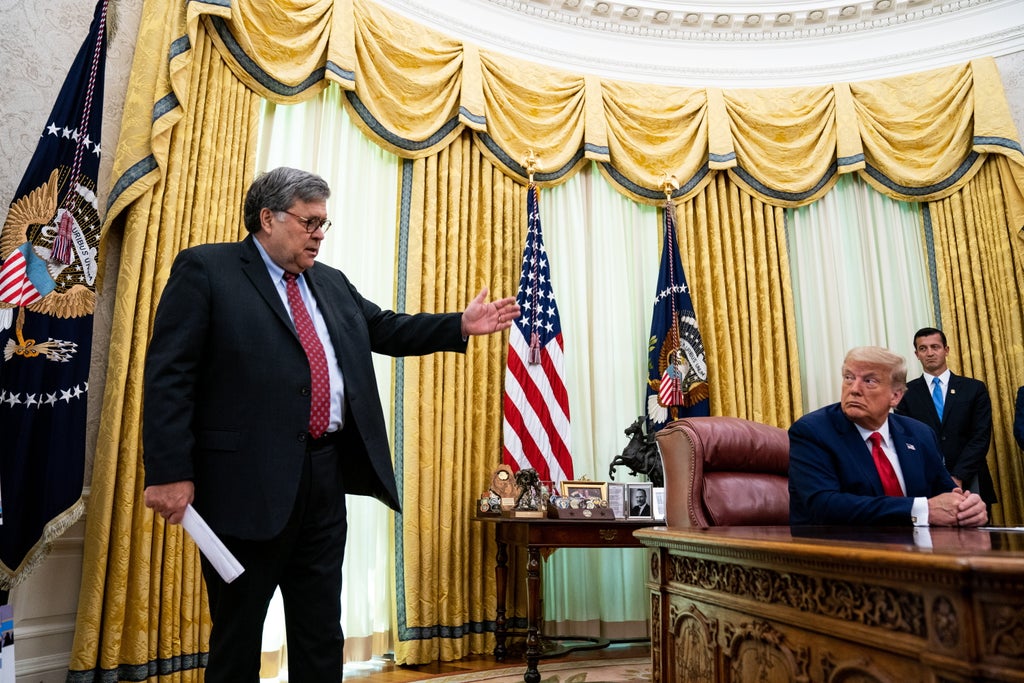 Former President Donald Trump’s hand-picked man to lead the Justice Department excoriated his former boss’s claims about election fraud in a series of interviews with Jonathan Karl, who served as White House correspondent for ABC News throughout the Trump presidency.

In interviews for Betrayal, Karl’s upcoming book detailing the final days of Mr Trump’s term in the White House, the former attorney general spoke about numerous theories floated by his former boss and Mr Trump’s supporters for his election loss to President Joe Biden, including allegations that voting machines operated by Dominion Voting Systems were hacked to alter vote totals.

“We realized from the beginning it was just bulls***,” Mr Barr told Karl, according to excerpts published in The Atlantic. “It’s a counting machine, and they save everything that was counted. So you just reconcile the two. There had been no discrepancy reported anywhere, and I’m still not aware of any discrepancy.”

Any issue posed by a computer error or malicious software intrusion, Mr Barr explained, would have shown up in recounts of the paper ballots produced at the time of voting.

Further looking into the issue in Michigan as part of an informal review in days after the election, Mr Barr also found reason to dismiss the president’s claims that boxes of ballots for Mr Biden were shipped in overnight in Wayne County, the state’s largest jurisdiction by population.

“In every other county [in Michigan], they count the ballots at the precinct, but in Wayne County, they bring them into one central counting place,” Mr Barr told Karl. “So the boxes are coming in all night.

“The fact that boxes are coming in [later at night] — well, that’s what they do,” he continued.

The comments are some of Mr Barr’s strongest regarding his former boss’s false claims about widespread fraud affecting the outcome of the 2020 election, other than a statement he made to an Associated Pressreporter in December flatly stating that his agency at the time had not seen any convincing evidence of widespread fraud.

“To date, we have not seen fraud on a scale that could have effected a different outcome in the election,” Mr Barr said at the time in a move that enraged Mr Trump and led to accusations from the former president’s supporters that Mr Barr was not taking them seriously.

In his interviews with Karl, Mr Barr also explained how he came under increasing pressure from then-Senate Majority Leader Mitch McConnell to reject the president’s conspiracy theories while Mr McConnell attempted to maintain GOP control of the Senate by winning Georgia’s special elections.

Mr McConnell, Mr Barr said in the interviews, was concerned that Mr Trump’s claims were damaging both his party and American democracy but was handcuffed by his need for the then-president’s support in the Georgia Senate races.

“Look, we need the president in Georgia,” Mr McConnell told Barr in one instance, according to The Atlantic’s excerpts, “and so we cannot be frontally attacking him right now. But you’re in a better position to inject some reality into this situation. You are really the only one who can do it.”

“Bill, I look around, and you are the only person who can do it,” Mr McConnell told him in another instance.

Ultimately, Mr Trump’s claims of election fraud would lead to his supporters storming the US Capitol on 6 January in an attempt to halt the certification of Mr Biden’s election victory, an event that resulted in several deaths.

In recent months, it has been reported by The New York Times’s Maggie Haberman that Mr Trump has told supporters at his Mar-a-Lago resort that he may be reinstated as president this year, though there are no constitutional means to do so. Mr Trump has also made frequent statements hinting at the possibility of a 2024 run for president against Mr Biden, who is expected to be up for re-election.