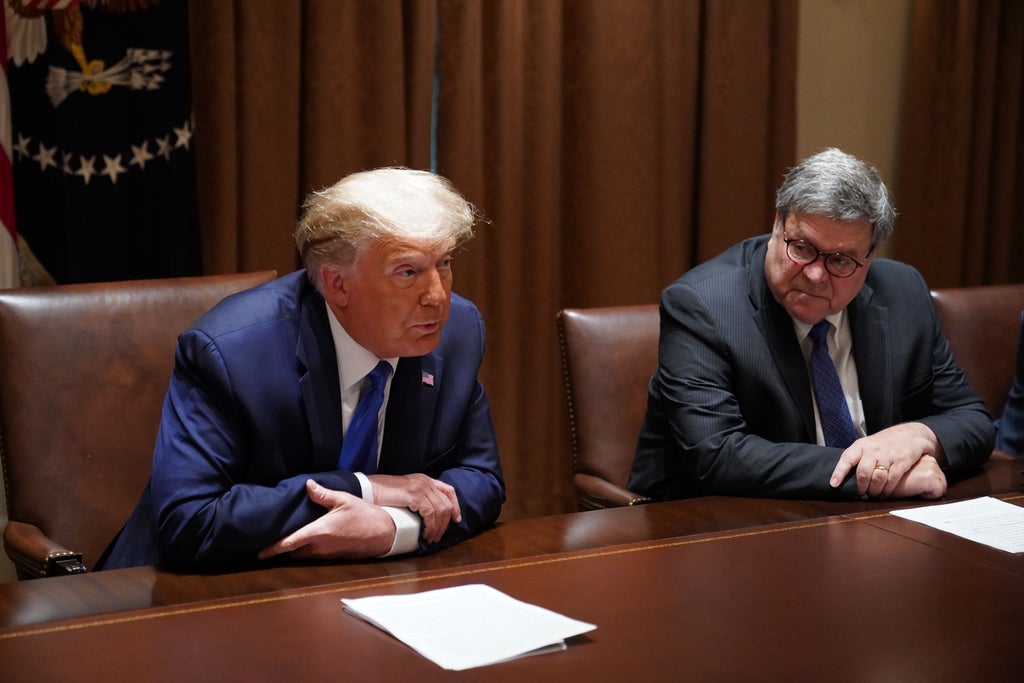 Donald Trump has hit out at Bill Barr amid reports that the former attorney general branded the ex-president’s claims of widespread voter fraud in the 2020 election “bulls***”.

“It’s people in authority like Bill Barr that allow the crazed Radical Left to succeed,” Mr Trump has said in a statement shared with a number of outlets.

“He and other RINOs in the Republican Party are being used in order to try to convince people that the election was legitimate when so many incredible facts have now come out to show conclusively that it wasn’t,” he said, using an acronym meaning “Republicans in Name Only”.

The outburst came following the release of a preview of journalist Jon Karl’s upcoming book, Betrayal, which looks at how Mr Trump and Mr Barr’s relationship fell apart in the aftermath of the 2020 election.

In the preview, Mr Karl, chief Washington correspondent for ABC News, says Mr Barr “expected Trump to lose and therefore was not surprised by the outcome”.

In the wake of the election, however, Mr Trump repeatedly made unfounded claims of election fraud, accusing his opponent, now-President Joe Biden of having stolen the election.

According to Mr Karl, Mr Barr had ridiculed the election fraud claims, asserting: “My attitude was: It was put-up or shut-up time”.

“If there was evidence of fraud, I had no motive to suppress it,” Mr Barr reportedly said. “But my suspicion all the way along was that there was nothing there. It was all bulls***.”

As Mr Karl notes, the Department of Justice did not end up conducting any formal investigations into potential voter fraud.

However, the journalist writes, as part of Mr Barr’s informal review, he did ask the US Attorney in Michigan about claims from Mr Trump that “ballot dumps” in Detroit had helped secure Mr Biden’s victory in the state.

Mr Barr also said he looked into allegations that voting machines across the country had been rigged to change votes for Mr Trump to ballots favouring Mr Biden.

According to Mr Karl, the former AG received two briefings from cybersecurity experts at the Department of Homeland Security (DHS) and the FBI.

“We realised from the beginning it was just bullshit,” Mr Barr reportedly told Mr Karl, noting that even if machines were somehow compromised, the disparities would have shown up in recounts conducted by hand.

“It’s a counting machine, and they save everything that was counted. So you just reconcile the two. There had been no discrepancy reported anywhere, and I’m still not aware of any discrepancy,” Mr Barr reportedly said.