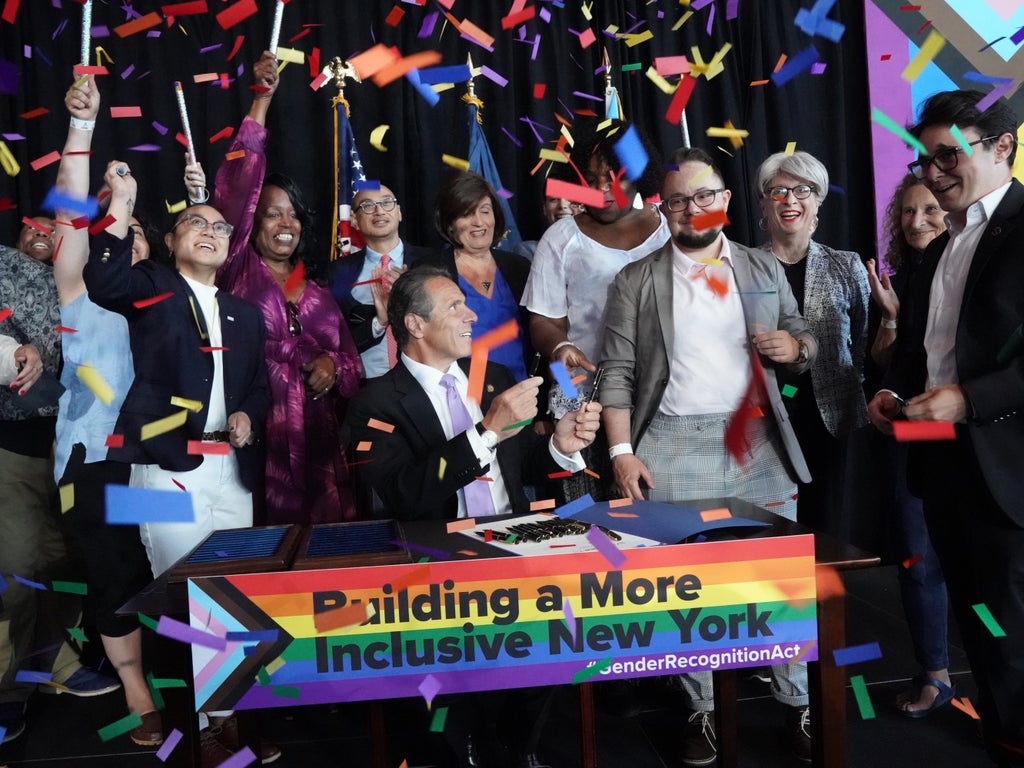 Activists and lawmakers from across New York state have championed the introduction of an act that will add a third option for gender to licences and birth certificates, after it was signed by governor Andrew Cuomo.

The Gender Recognition Act, which allows New Yorkers to chose their own gender for driver’s licences and to opt for “parent” instead of “father” or “mother” on birth certificates, also bans discrimination on grounds of gender identity.

It is among two dozen laws at state level that recognise non-binary and transgender individuals in the US.

Mr Cuomo, after signing The Gender Recognition Act at a ceremony, said on Thursday that “every New Yorker deserves to be free from discrimination and have state-issued identification and processes that respect them for who they are, recognise their gender identity and protect their safety”.

New York Assembly member Danny O’Donnell called the introduction of the Gender Recognition Act “a milestone in our fight to secure LGBTQ rights”, and said it “will make life safer for trans individuals, reduce stigma, and affirm trans individuals’ identities.”

“Our work for equal rights is far from over, but we have proven that love is love, that trans lives matter, and that we are ready for the fights ahead,” Mr O’Donnell, wrote.

An anti-poverty non-profit, Legal Services NYC, also welcomed the introduction of The Gender Recognition Act, which it said had made history by recognising a third gender for non-binary individuals.

“This is a huge step towards affirming the identities of non-binary and intersex people, who will no longer be forced to misgender themselves on official documents,” the non-profit tweeted after it was signed by Mr Cuomo.

Thanking LGBT+ campaigners and legislators for their efforts, Legal Services NYC added that it was the work of “the countless intersex and non-binary New Yorkers who made this fight possible!”.

Andrew Joyce, the chairman of the legislature in Albany County, also applauded the signing of the Gender Recognition Act for creating a “more inclusive” New York.

“As we continuously work to building a more inclusive New York, I applaud the Governor for signing The Gender Recognition Act and giving New Yorkers once again the respect and rights they deserve”, wrote Mr Joyce.

The Albany legislator added that “LGBTGI+ rights are human rights, and transgender and non-conforming New Yorkers deserve an ID to reflect who they are”.

According to the Williams Institute, a think tank at the University of California, Los Angeles, as many as 476,000 transgender adults do not put their preferred gender identity included on a driver’s licence or state ID. If accurate, it would amount to 34 per cent of the whole transgender population of the US.

The introduction of the Gender Recognition Act in New York, which came on the 10th anniversary of same sex marriage becoming law and the end of Pride Month, follows the passing of anti-transgender laws by Republican-held legislators.